Every Valentine’s Day, I wake my husband up with the sweet aroma of freshly baked cinnamon rolls in the oven. Nothing says love liked baked goods, right? This year, he had an early morning meeting at work, so I made them for him the morning before, and made another batch to bring into our hard working staff at work. There is absolutely nothing better than homemade cinnamon rolls and I make mine extra gooey. In other words, I double the butter, double the sugar and double the cinnamon which creates a pool of melted goodness at the bottom of the pan creating a perfect environment for the rolls to bake in. Every time I make these, they are a huge hit…and people don’t realize how simple they really are. They take some planning ahead because the dough has to rise twice.

I actually started writing this post last year, when I made the cinnamon rolls in the shape of hearts. But, I find that the filling stays in the roll better and the rolls stay softer in their traditional spiral form. After the rolls disappeared after 10 minutes in the office, the recipe was requested. So here it is! In the past I have used a homemade dough, but I find the frozen Rhodes white bread dough makes a wonderful cinnamon roll and makes the process much easier. Makes 12 large cinnamon rolls.

View all posts by Ashley 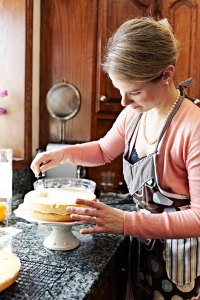